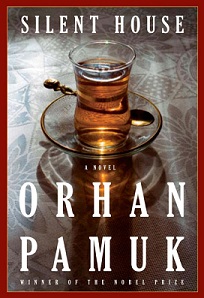 Silent House was the second novel written by Orhan Pamuk,[1] and has been recently translated to English. Pamuk is well known to Western literary audiences due to his highly-acclaimed novels My Name is Red and Snow as well as his historical-autobiographical account of his native city in the eponymously titled Istanbul.[2] The relative obscurity and delay in translation of Silent House is somewhat surprising as it is more easily readable than the convoluted narrative structure of My Name is Red and the slow-plodding and political-charged Snow. Like all of Pamuk’s works, this story takes place in Turkey, and is set during the country’s politically tumultuous period in the late 1970s before the military coup in 1980. This era would have a been a formidable time for the author, given he was in his late 20s. The plot revolves around the annual visit three siblings make to their grandmother’s house in Cennethisar, a once-sleepy fishing village now resort-town near Istanbul. The trek the family members pay is one mainly out of consanguineous obligation, and the conversations between the generations are awkward and laconic.

There are no parents to pay a visit as they have all passed away, in part to a history of alcohol abuse that runs through the male-side of the family. Each character in the novel is richly textured and relatable to the reader. Pamuk has noted that Silent House is especially popular among younger readers, and he sees attributes of himself in each of the main figures. The youngest, Metin, is a precious high school student who dreams of studying in America for his university education. He spends his time with a rich clique of students in the town, winning entry to their society with his amiability and tutoring skills. His slightly older sister Nilgun is a sociology student, a Marxist,[3], and a bookworm. While she idealistic, she is not outspoken, and prefers to spend most of her time burrowed in books. The eldest of the trio is Faruk, an academic historian, who like his father and grandfather has become an alcoholic. Faruk is a nihilist at some moments, but can be moved to higher aspirations when he is excited by an intellectual pursuit.

Fatma, the grandmother, is attended to be the dependable Recep, who is a dwarf, and he receives more abuse from Fatma than the townspeople. We later find out that Recep is the illegitimate child of the grandfather Selahattin Bey. The final character of note is Hasan, who is the nephew of Recep. Unable to concentrate in his studies, Hasan has become a high school drop out, and has joined a gang of right-wing nationalists. Each chapter is told from the perspective of a character, with the appropriate tone, construction, and even punctuation matching each character’s personality. While empathy may not be an optimal emotion for deciding ethics, the view points of each character are so compelling that we are in complete sympathy with their motives even when their behavior is deplorable.

Fatma’s chapters are composed as a stream of consciousness and the events surrounding her are being constantly enmeshed with her mournful remembrances. Most of her dialogue takes place with her late husband, the idealistic doctor who sought to write an encyclopedia that would bring Western thought and ideas to break the ignorant slumber of the “East”. Proselytizing his atheism to his family and the villagers, Fatma resents his blasphemy to this day and simultaneously feels bereft of his presence whilst being assured he is burning in hell fires. We discover that the poorly kept dwarf-servant Recep is the illegitimate son of Selahattin, and he receives Fatma’s enmity as punishment for her husband’s infidelity. Yet despite her malicious behavior towards Recep, the reader does not side against her, especially as we learn more about the neglect and ruin that her marriage to Selahattin caused. Raised to be the perfect Muslim bride in the days of the Ottoman empire, she wed the man most opposed to decorum and ideals of family life she held so dear. Selahattin’s habits of drink, failure in medicine, and obsession over a never-to-be-completed encyclopedia led him to slowly pawn off his wife’s jewels until she was left with only the box in which she now keeps jealous guard over. In her reminisces, we see Fatma give response to her late husband’s declarations in a way she never could when he was alive.

Like Metin’s imaginary conversations, the other characters also engage in fictional dialogues. Metin spends most of his time day dreaming of a love affair with a rich society girl. When he actually professes in love, there is a complete disjunction between his mental imaginings and her response. The most lively imagination comes from Hasan who has fallen in love with Nilgun. He constructs elaborate methods of instigating conversations, but when the actual moments present themselves he gets cold feet and retreats to even more elaborate stratagems for the future. Imagining himself as the Just Ruler of a future Turkey rid of the communists, atheists, and foreign influences he is brought a prisoner one day. As a gentleman dictator, he has the prisoner’s constraints removed and learns that this left-wing insurrectionist is indeed Nilgun. Resisting her seduction attempts he orders her execution. Hasan reveals the conflicting ideas he has of himself as a man. While he desperately wants to be powerful and desired, he shows that is also terrified of female sexuality. His views of women are well described by the Madonna-whore complex.

Faruk’s conversations are mainly internal as he struggles to grasp the importance of history and its place in society. While doing research at the local archive, he reads of both mundane and wonderful historical events and imagines brining these stories to a wider audience. In contrast to his grandfather, Faruk does not want to wipe the slate clean, but rather celebrate the human side of history. A universal narrative that will connect the citizenry to their time and place and make history as clear as the outlines of a road seen from a higher plane. However, Faruk is plagued by depressive bouts made worse with drinking. He is harmless, but lacks sufficient ambition to translate his productive peaks into sustained activity. The last character to receive their own chapters in the dwarf-servant Recep. Despite being lonely, suffering abuse from Fatma, and casual cruelty from the local townspeople, he maintains and air of dignity and grace. Of all the characters, he seems the most interested in maintaining the Bey family’s honor. His motivations are not exactly clear, given his illegitimate status as a Bey (a secret only known by the grandmother).

While the subject of Hasan’s infatuation and Faruk’s adoration, we are provided with a limited insight into the mind of Nilgun. She is the only main character not given a narrative role. Like other female characters in Pamuk’s work, she seems passive and largely accepts the behavior of the male characters towards her. It is unfortunate that she is not given a more descriptive inner life. Like Pamuk’s other novels, this one provides an excellent story that captures the unique issues of religion, class, and politics in Turkish history and society. The memories of each narrator gives a sophisticated feel to an otherwise simple setting. This book is worth reading for those who are new to Pamuk or are existing fans. More generally persons interested in the Orientalist themes of the tension between East and West, Turkey’s place in the European orbit, and the clash between modernism and tradition and enforced secularism versus Islamic culture will also find this book worth reading.