Return of a King by William Dalrymple (Book Review)

I remember having a sense of déjà vu when I was re-reading A Study in Scarlet, the first book in the Sherlock Holmes series. Dr. Watson begins his narration by recounting his military service that ultimately led to his discharge.

The regiment was stationed in India at the time, and before I could join it, the second Afghan war had broken out. On landing at Bombay, I learned that my corps had advanced through the passes, and was already deep in the enemy’s country. I followed, however, with many other officers who were in the same situation as myself, and succeeded in reaching Candahar in safety, where I found my regiment, and at once entered upon my new duties. The campaign brought honours and promotion to many, but for me it had nothing but misfortune and disaster. I was removed from my brigade and attached to the Berkshires, with whom I served at the fatal battle of Maiwand. There I was struck on the shoulder by a Jezail bullet, which shattered the bone and grazed the subclavian artery. I should have fallen into the hands of the murderous Ghazis had it not been for the devotion and courage shown by Murray, my orderly, who threw me across a pack-horse, and succeeded in bringing me safely to the British lines.

Is it not unsettling that 120 years after the Second Anglo-Afghan War was concluded with the fictional Watson been shot at by a Jezail sharp-shooter, Canadian troops speaking the same language and with the same monarch would be stationed in Kandahar being shot at by the Taliban? Or consider that the first elected president of Afghanistan Hamid Karzai would also come from the same Popilzai sub-tribe as the re-instated British puppet Shah Shuja in 1839. There are also interesting parallels between the 19th century context of The Great Game and the 21st century’s War on Terror. Both geopolitical and military campaigns are based on controlling who has access and influence in Central Asia. Whereas Britain was concerned with Russia’s influence in Afghanistan to prevent a northern invasion route to colonial India, the NATO forces are focused on preventing a safe-haven for Islamic extremists. In both cases the focus is to prevent foreign entities from controlling Afghanistan. This is seen as important not because Afghanistan is important in and of itself, but because of the risk that these threats can be projected from this region onto Western interests.

While Al-Qaeda in Afghanistan has been largely destroyed and most of senior leadership killed, the subsequent occupation and establishment of a democratic system of government has been a failure. The war in Afghanistan is approaching the two decade mark, and Western countries are preparing to withdraw their military presence. Negotiations between the Taliban and the government (which were unthinkable even several years ago) are now underway, with the optimistic outcome being the conversion of the Taliban into a political party à la Sinn Féin. Even in the best case of a de-armed Taliban the imposed government structure will almost certainly collapse after the withdrawal of NATO troops, or at a minimum morph into something that better manages the internal tribal and religious conflicts within the country. One wonders what historical precedent NATO-military commanders and Western politicians were hoping to follow in their subsequent occupation of Afghanistan after the expulsion of Al-Qaeda to the North West Frontier Province of Pakistan? They certainly did not head Harold MacMillan advice to his soon-to-be successor Alec Douglas-Home: “My dear boy, as long as you do not invade Afghanistan you will be absolutely fine”.

While the War in Afghanistan has been a long-term failure, it cannot be compared to the total catastrophe of the First Anglo-Afghan War which has been masterfully recounted from both the British and Afghan perspectives in William Dalrymple’s Return of a King. Using a combination of British military archives and never-before-seen Afghan sources, Dalrymple tells the dramatic story of how Britain could march into Afghanistan with tens of thousands of troops and be completely routed. At the height of the military catastrophe as 16,000 British subjects retreated from Kabul to Jalalabad with only a single European reaching refuge.

Dr. Brydon was the sole European survival of the Kabul retreat 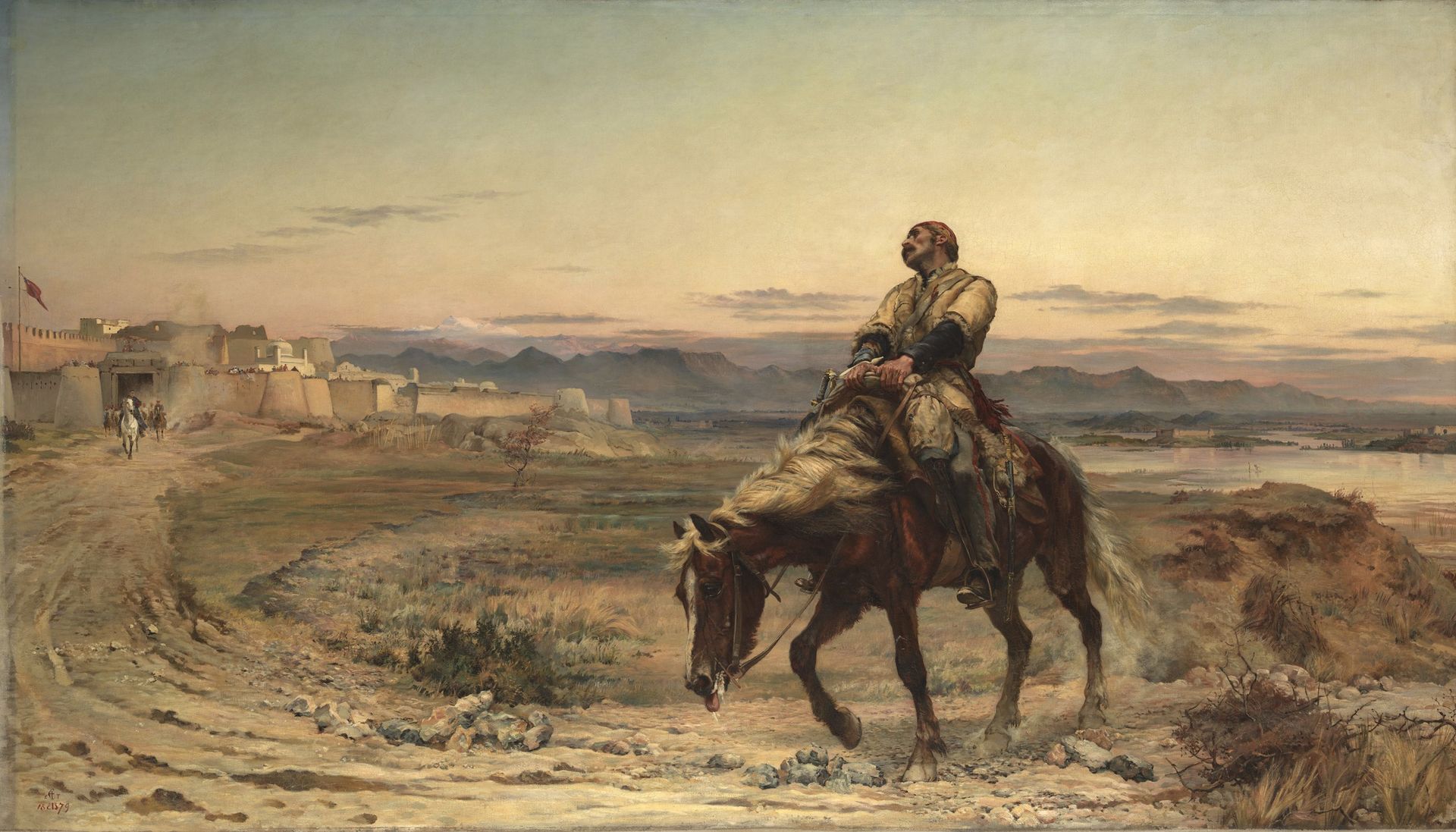 When we refer to the “British” invasion of Afghanistan this expression is somewhat anachronistic. During this time India was run by the British East India Company which was a joint-stock company, and the military force which invaded Afghanistan was entirely paid for by the Company.[1] While the Company was regulated by parliament and was not a creature of free-enterprise, its foreign policy considerations were framed within the context of its long-run profitability. At this point in Indian economic history, the Company was able to pay for the Afghan invasion by its windfall profits from the Opium trade to China.[2] However the Company’s revenues would not be able to pay for a sustained military intervention in Afghanistan. Dalrymple stresses that logistics and prolonged occupations have always been the Achilles heal of invaders in this country. When the British launched their invasion they brought with them tens of thousands of camels and camp followers to carry equipment and supplies, with senior military commanders personally requisitioning hundreds of camels for themselves. The American and Soviet invaders have also found that while initial battlefield victories are possible, the cost of maintaining a military presence in the country is prohibitive. Afghanistan is a country of rocks and men and extracting revenue is like getting blood from a stone. While the Company had been training soldiers and officers in India for more than one-hundred years, the commanders of the invasion were mainly drawn from the actual British army. For example the incompetent Major-General William Elphinstone who was in charge of the expedition had not seen combat since the Battle of Waterloo around 25 years previously. Competent and respected Generals in the Company forces such as William Nott were often overlooked for promotion with calamitous results.

As long as Afghanistan remained within the British sphere of influence there was little need to directly intervene in its affairs. Hundreds of years of British colonial administration were distilled into the following quip: “rule the Punjabis, intimidate the Sindhis, buy the Pashtun, and honor the Baloch”. While the British had officially supported the Sadozais as rulers of Afghanistan, when their regime was usurped by the Barakzais in 1809, Shah Shuja was granted asylum by the British. Despite three subsequents attempts to regain his throne, the emir Dost Mohammed retained control over the country. However the geopolitical equilibrium was about to be upset by two events in the context of the Great Game in 1837. First the British diplomat in Kabul Alexander Scott had reported that the Russian agent Count Witkiewicz had been sent to Dost Mohammed with a Russian promise of military and political support for retaking the city of Peshawar which had been lost to Sikh Empire, which was itself allied to the British. Second, the Russians had also encouraged the Persian Qajar empire to take the city of Herat (which was ruled by a Sadozai) and a military siege was launched. The British sent an ultimatum to Dost Mohammed to expel the Russian envoy and remove his demands for the return of Peshawar. While the Emir was actually sympathetic to forming a political alliance with the British their demands were impossible to carry out politically. Furthermore the British offered the Afghans nothing in return for their demands. Burnes was ultimately expelled from Afghanistan and the British drew up their invasion plans. However by the time the Army of the Indus was marching into Afghanistan the siege of Herat had been abandoned and the Russians had left without fulfilling their promise of military support. As in the current invasion of Afghanistan, the stated mission objective changed to reinstating the rightful rule of the Sadozais with the formerly deposed Shah Shuja.

The initial military battles were relatively easy victories for the British and some of the commanders showed impressive initiative such as the Battle of Ghazni where Indian sappers were able to find a weak point in the city’s heavily fortified defenses and the Company troops were able to force there way through a single point of entrance.

British successful break into the Fortress of Ghazni 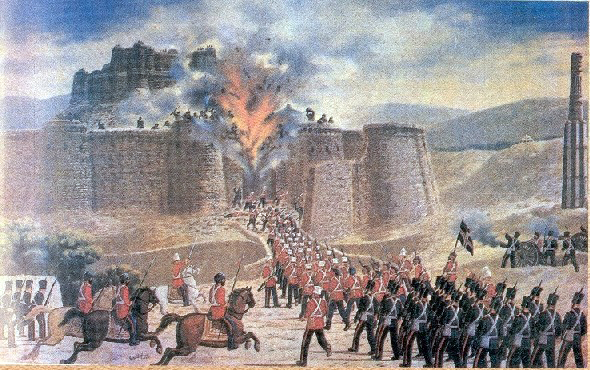 After conquering Kabul and reinstating Shah Shuja the British retained a force of 8,000 men in the city to ensure his throne remained viable. As it become clear that this kernel of troops would be required to stay semi-indefinitely the wives and children of the Company army were allowed to join the troops in the city. After two years of occupation the political situation of Afghanistan was reaching a boiling point. In order to keep costs down the British had forced Shah Shuja to “modernize” the Afghan administration which meant canceling many of the feudal arrangements and bribes which had formed the political glue of tribal Afghanistan. This led to some of Shuja’s most loyal supporters being dispossessed and dishonored.

At the same time the arrogance and cultural insensitiveness of the British occupation force in the city of Kabul was leading to discontent among the locals. Cases of Afghan women being assaulted or raped by British troops were seen as being carried out with impunity. In an honor-based society like Afghanistan with a long tradition of tribal codes of conduct these slights led to extreme hostility. The subsequent explosion of unrest and bloodshed in Kabul would prove eerily similar to what was seen in the Indian Rebellion around 15 years later. Burnes was cut to pieces in his compound by an angry mob and the British troops failed to quell the protesters. Dalrymple highlights the incompetence of the stationed British military commanders in the Kabul uprising. Shah Shuja repeatedly gave advice as to how to disarm the situation but was roundly ignored. As the British troops began to evacuate and retreat they let supply centers that could have been easily defended be taken by the enemy. In the final calamitous decision Shuja warned the British not to retreat to the fortress of Jalalabad until after the winter. Instead the entire army and civilian retreated through frozen mountain passes and were butchered, captured, or sold into slavery to almost a single man.

Return of a King should be made essential reading for anyone involved in matters of foreign policy or who wish to better understand the history of Afghanistan and Central Asia. Dalrymple is a first-rate scholar of the Indian subcontinent and has written a beautiful and humanistic portrayal of the region and its people. While the book is written from a Western perspective, through the extensive use of Afghan archival sources and narratives a balanced account is provided. Sadly foreign powers continue to repeat the same military blunders in Afghanistan more than 150 years after the Army of the Indus launched its ill-fated invasion. It seems only a tragic matter of time before new and rising powers like China see the need to military intervene in the land of “rocks, sands, deserts, ice and snow”.