A Short Sojourn in Seattle (Pensée)

I recently took a two-day trip to Seattle with my best friend to both claim a rightful vacation and re-kindle my love affair with the Emerald city. The trip was an important reminder to me of the purpose of travel in modern life alongside some other associated geographical and economic issues that the city provided a lens into.

Two primary facts would stand out as the difference between travelling from A to B in 1916 and 2016:[1] [i] the cost and challenges of travel are significantly lower, and [ii] mass travelling is a leisure good that stands in contrast to the quotidian routines of one’s career. My 2016 incarnation sees going down to Seattle to be a nice break over a long weekend. The 1916 version of myself may have travelled to Seattle as an initial stop on a long tour down the pacific coast; a sort of Pacific Grand Tour.[2],[3]

I postulate that the easier travel becomes the less romantic and adventurous anyone destination can be. If the Skytrain were a teleporter that took me to either downtown Vancouver or Pike Place Market, then the whole concept of a vacation to Seattle would be significantly diminished. Not only does the difficulty of travel augment the grandeur of the escape, but the way in which one feels it surely has an impact too. Boarding a sterilized cylinder that travels above the cloud cover does not make one feel as though one is actually moving.[4] In contrast, a stately carriage galumphing at 60 mph down an American highway with slowly shifting pastoral landscapes provides a much more visceral feeling of escape.

How do you know you are on vacation when you have arrived at a certain destination? Consider this litmus test. Would you do this if you were living here? When people come to Vancouver, they go and see the art gallery, or the aquarium, or VanDusen Botanical Gardens. What do I do in Vancouver? Mainly go to movies, restaurants, hikes, and coffee grabs with friends. I am guessing that Seattleites (this is the correct demonym) do not feel the need to do anything related to the space needle for example.

Indeed the activities one feels compelled to do when abroad tend to involve large buildings, quite possible adorned with a more-than-usual number of marble friezes. Vacation time is scarce, and hence should be used more intensely, but I think it should not be engaged in artificial activities. My friend and I decided to do a more prosaic option and follow several of Seattle’s well-catalogued stair-trails, which incidentally are redolent of Gerrymandered district lines (see image below). Another reason to avoid tourist attractions with neoclassical architecture is the delight in seeing your own spatial version of a city. After all, does not it seem slightly incongruous that two Vancouverites who have a very different ‘A’ should experience a similar ‘B’? No, our trip was our unique experience before it even began. 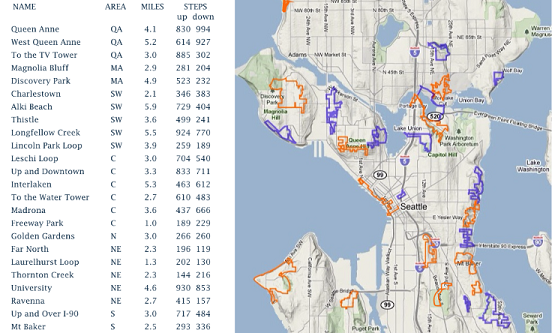 Agreed-upon invisible lines still matter. America still matters. This may be the narcissism of small differences, but the fibre of the American character has a distinct difference to the Canadian texture. Everything in the country is ‘times two’. More homeless people, more architectural design firms, more bookshops, and more Bern.[5] The citizens of America are more inherently expressive. I envy their confidence like a bad dancer who delights in their lack of self-reflection. Issues of politics feel like titanic struggles. The country has embraced the message of evolutionary biology and seems to be following an algorithm of struggle

Despite Seattle being part of the ‘Left Coast’, I sense a robust republicanism (lower case) like a 21st century de Tocqueville that makes my Canadian consensus-building personality feel stuffy and out of place. Am I a moth eaten cashmere sweater of ritual and history in a land of churn? Maybe I should take up smoking cigarettes because they seem so cheap? Maybe it’s time to open that artisanal mushroom growing operation like I always thought about? Maybe I should seriously consider electing a spray tan mop?

Overall Seattle continues to be a cool city worth travelling to frequently. I was taken in by the extremes of everything, from the buildings to the unfortunate poverty and homelessness crisis that the city seems to be going through.

At the lowing of the day, We mounted our Bolted steed;

Not worried for the course of speed,

Along the pastoral lay.

Upon our entrance nigh,

And with a long-awaited sigh,

We left behind our woes.

And as we wandered Mooreward bound,

We could not but notice among these:

There stood the plants that could not reach,

The light above such canopies.