After the death or resignation of the Pope, a papal conclave is called to elect a new Bishop of Rome. When white smoke rises from the Sistine Chapel the process of apostolic succession is complete and Saint Peter’s shoes have been filled.[1] Who are we to say by what mysterious process accession is carried out in the Holy See? And so it is with one’s next choice of book to read. Maybe it would be good to read the Aeneid finally or a Dicken’s novel. No, the three fates have decided that Winchester’s Outposts is to be next in turn. A prolific writer, Simon Winchester has written books whose topics range from Krakatoa to the Oxford English Dictionary. In this work, Winchester recounts his travels to the last remaining British colonies throughout the 1980s. Spurred by conversations in which he and his friends ask themselves “We do still have a few places left don’t we?”, Winchester sought out to find where the last vestiges of Britannia reside, and how the people of these islands live and see their place within the remnants of the British Empire.

While I did end up enjoying the book, the introduction gave a bad first impression. Written sometime between 1997-2003, this foreword seemed weirdly detached from the topic at hand, with a long digression on capitalist imperialism replacing the British Empire. While not a surprising sentiment for a man who “lives on a small farm in the Berkshires in Massachusetts and in the Western Isles of Scotland”, none of his points were relevant to the rest of the book and the preface can be skipped without any loss of fidelity to the narrative. Most of the injustices documented in his book relate to treatment of these outposts as military assets with little regard to the locals. Economics has very little to do with these transgressions. Had the introduction focused on the way American military bases function as quasi-imperial outposts this would have been more appropriate.

In the first chapter, Winchester discusses the list of regions he decided to travel to. It turns out that actually deciding what is a “British Colony” is difficult. The author decides to mainly pick British Overseas Territories such as St Helena, Hong Kong (at the time), and Bermuda. Places like the Isle of Man, which are Crown Dependencies, were excluded as they were “too British”, and not really “Outposts” of the Empire. CGP Grey has an excellent and amusing video of what legal entities actually constitute the United Kingdom.

Or here is a quick visual summary. 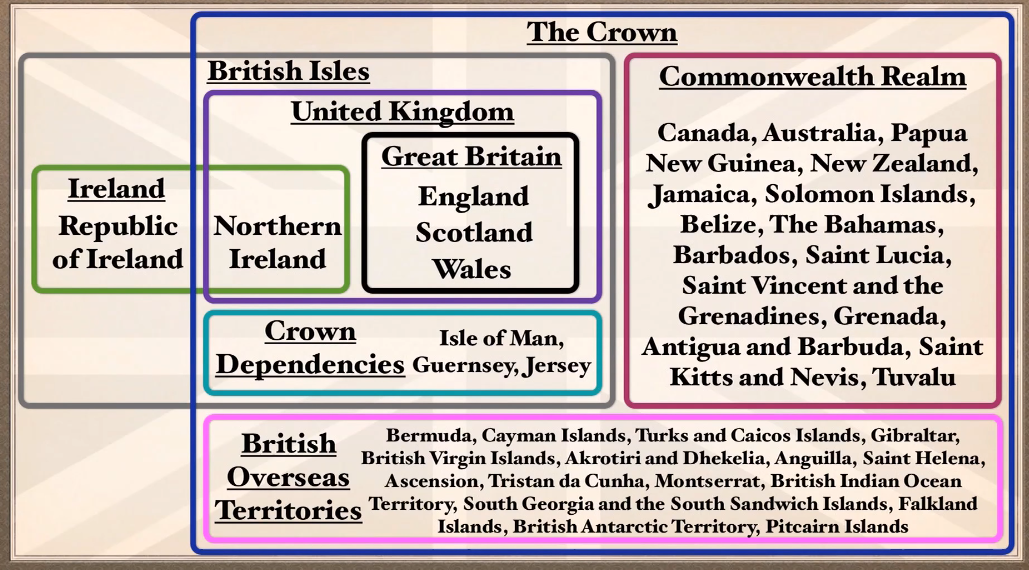 Where is Diego Garcia again?

First on the itinerary is the British Indian Ocean Territory and Diego Garcia, which is the largest island in the archipelago. The island is mainly known for the forced depopulation the locals experienced in the 1960s to make way for an American military base. After being denied permission to visit the island officially, Winchester managed to get ashore regardless but was brusquely sent back to sea when the officers realized he was a journalist. Within the spectrum of incompetent and tone-deaf behavior by the Foreign and Commonwealth Office (FCO) in the post-colonial era, the example of Diego Garcia is the most glaring. Not only was the local economy left to collapse so that the islanders could forcibly removed with little resistance, the British government let the American military have a base there at almost no cost. One could easily imagine the Americans having to pay into a compensation fund for the several thousand islanders who suffered from expulsion. But as the entire book makes clear, London bureaucrats put infinitesimally small weight on the interests of their citizens who live in overseas territories.

The British Approach to foreign possessions

These three tiny islands are located in the South Atlantic between Africa and South America. Their position in the British Empire was extremely important before the construction of the Suez Canal as all ships would have to pass the Cape of Good Hope to get to Asia and having a refueling station in this location was strategically valuable. Saint Helena’s is the most of famous of the islands as Napoleon was exiled there for the last 6 years of his life. While the economic prospects for islanders is limited, Winchester paints a portrait of a proud and loving group of people who take care of one another. Genetically, the islands seem fascinating since the inhabitants are of mixed race and it would be interesting to see where they fall within the different Haplogroups.

When Winchester made the trips to these islands in the 1980s, it was a logistic challenge to actually land on them. However, I was pleased to see that St Helena’s now has an airport. A recent BBC report about how the airport could change the economic prospects of the island is shown below.

One common theme throughout this book is that despite the neglect these colonies receive from the mother land,[2] they are still patriotic and amusingly British. What Churchill referred to as the British life, and the long continuity of our institutions and our Empire are alive and well on these small rocks. Proving that one of the magnificent things about British identity is that it is a sense of civic participation and not of blood and soil. 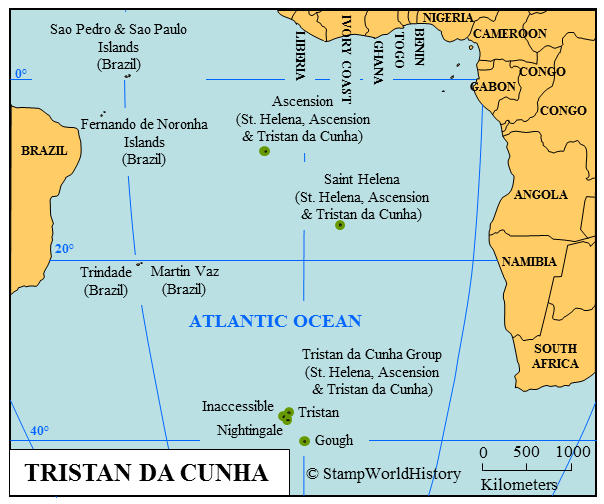 The most interesting chapter for me was the visit to Hong Kong when it was still a British Territory. Whereas to be a British governor on a volcanic island in the middle or the Atlantic or Indian ocean may have limited appeal, the governor of Hong Kong has no such deprivations. First there is the residence, Government House where one gets to live in a villa surrounded by skyscrapers. Second, access to a Rolls-Royce Phantom V landaulette should the circumstance require it. Third, one was put in charge of the one of the most economically successful polities on planet earth with very little oversight. Yet as Winchester points out, Hong Kong is actually Chinese. Not just in the sense that it literally is part of the country geographically, but more that the citizens of the country are not British in the way that the other islanders are in say the Falklands.

The extent to which Hong Kong is British is in the underlying political source code – with the government structure as well as legal, economic, and business practices. Despite acknowledging the political uncertainty that was going to occur when Hong Kong re-entered China, Winchester acknowledges that the acquisition and maintenance of Hong Kong as a British colony would not be sustainable. A very poignant video showing the departure of the last governor of Hong Kong (Chris Patten) with a brass band playing God Save the Queen and Auld Lang Syne and a return of the Union Jack can be seen below on that momentous day of the handover on July 1st, 1997.

There are many other interesting journeys recounted including to the Falkland Islands and the various Caribbean territories. Overall this is an extremely interesting book and preserves an anthropological snapshot of some of the last remaining “colonial persons”. With the loss of Hong Kong, I fear these British Overseas Territories will continue to fade in further political obscurity for the British state. However even if London pays scarcer attention, I hope the islanders in many of these places are able to leverage the history of British institutions (such as the rule of law and the English language) to be able to attract outside economic activity. Many of these islands have extremely interesting and unique flora and fauna, and ecological tourism seems a way to extract rents from their natural endowments. Furthermore as Bermuda has shown, American investors are more than willing to invest their money in a country that is both politically stable and speaks English. However as sea levels continue to rise and tropical storms worsen from global warming, I hope these natural forces do not prove to be more catastrophic than the political neglect these territories have received from their British suzerain.