Book #1: Cigars of the Pharaoh by Hergé

I have fond if hazy memories of reading all of my father’s Tintin comics as a kid. My impression was that Tintin was a sophisticated and fresh-faced looking youth who got to travel the world solving crimes and occasionally shooting a pistol. Quite exciting stuff when you are twelve and not able to travel unaccompanied outside of a six block radius. On a whim I decided to pick up a Tintin comic and see how my youthful memories aligned with my current tastes. I remember Cigars of the Pharaoh being one of the more popular titles so it seemed liked a good place to start. My impression were mixed, but leaned to the side of disappointment. While some of the story elements might be considered risqué for today’s youth (organized crime and the opium trade), the plot comes off a quite puerile. The characters are one-dimensional. The geography seems flexible (jumping from Egypt to India at miraculous speeds). Everything needs to be spelled out to the audience to ensure we understand who are the goodies versus the baddies. Even for someone like myself who is relatively inured to politically incorrect colonial fantasies, even I was shocked at some of the racial caricatures in the book. One can only wonder about Tintin in the Congo. It wouldn’t surprise me if Tintin’s books were removed from school libraries. However the comics are nicely illustrated and the plot satisfactorily ticks along. My view upon finishing the book was that Hergé’s work are a useful lens into the colonial mindset of mid-20th century Europe. Depending on my mood, I may read a few more this year. I am guessing that they may not be the best choice of reading material for the next generation of children.

I was on the lookout to read Tanya Talaga’s Seven Fallen Feathers: Racism, Death, and Hard Truths in a Northern City after I had heard her deliver a powerful 2018 CBC Massey Lecture. After realizing my partner had a copy of her bookshelves, I decided to take it up. While the book focuses on the tragic deaths of seven first nations students attending a high school in Thunder Bay, it is also a broader narrative about the history Canadian-Indigenous relations from residential schools to the Department of Aboriginal Affairs. Talaga elegantly weaves the narratives of the student’s families and their histories to give us a broader understanding of the extraordinary challenges that First Nations communities face from crushing poverty to institutional exclusion. When Canada’s last residential school closed down in 1996 it was clear that they the government’s coercive attempt to “take the Indian out of the child” had led to appalling levels of physical and sexual abuse, as well as stagnating educational attainment for Indigenous Canadians. Going forward the government would pay for isolated First Nations communities to send their students to larger urban centres, sometimes hundreds of miles away, to receive primary and/or secondary education. For Indigenous youth in the Nishnawbe Aski Nation (NAN) this meant attending Thunder Bay, which is considered the “capital” of Northern Ontario. 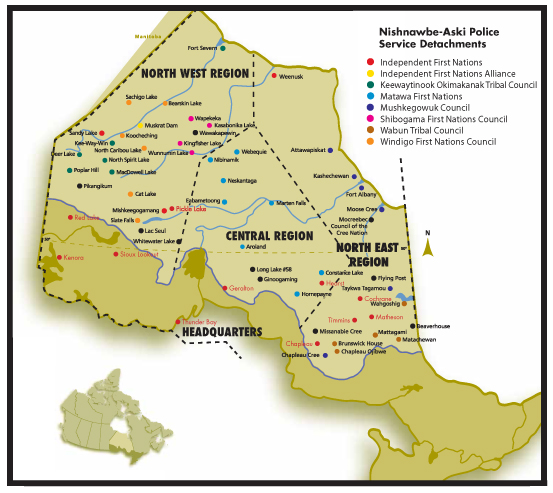 The first year the Dennis Franklin opened its doors, one of its students, Jethro Anderson age 15, was found dead Kaministiquia River. The police ruled it an accidental drowning due to intoxication. Over the next 11 years, six other young students who were attending school in Thunder Bay would also die. Despite six bodies being found in the water under questionable circumstances of death, the police ruled all of them accidental drowning cases. For the parents and teachers there is both a crushing sense of sadness and hopelessness. Talaga profiles how many of the youth suffer from cycles of depression and drinking. Even in normal circumstances parents have little control over adolescents, let alone when they are hundreds of miles away in a new city with a new social circle. In addition to their day jobs many of the school employees patrol the streets of Thunder Bay at night to make sure there aren’t of their kids out alone or getting into trouble. Students who break rules around truancy or intoxication are made to sign behaviour contracts and then are referred to an Elders program. Yet it is not enough for some students who began to spiral downwards. It was in this state of vulnerability that seven students died. But because of a failure of police to seriously investigate any of the deaths, it is unclear what led to their final tragic fate. Thunder Bay has the dubious honour of being the highest-ranked Canadian city in terms of hate crimes and Talaga recounts stories of random acts of violence and racism perpetrated against the Indigenous population of the city. It is completely possible that some of the students were murdered.

Upon finishing the book I had a much better sense of the staggering challenges and institutional racism that Indigenous Canadians face in the country. Without access to safe and high quality secondary education, it seems inconceivable that Indigenous Canadians will be able to escape the crushing rates of poverty, at around 25%, in an otherwise wealthy country. There is at least a growing awareness and political consensus that action needs to be taken. In 2015 the Truth and Reconciliation Commission released its 94 calls to action, and the Canadian government has at least paid lip service to the idea. In 2019 the Thunder Bay police department agreed to launch an investigation into nine Indigenous deaths that had otherwise been closed. Even though the direction of travel may be right, I do not imagine that the political and economic situation of Canada’s First Nations communities will be significantly improved any time soon.

Book #3: The Book of Negroes by Lawrence Hill

My first encounter with Lawrence Hill’s The Book of Negroes was actually more than ten years before I read it. I was working at Chapters when an elderly Caucasian customer asked if I could help her find a book. I went to our computer terminal and asked what was the book called. When she told me the books title I was a little startled because I was afraid that she was looking for some long out-of-print novel that was published in an era when “Negro” was acceptable nomenclature. To my relief it was actually Lawrence Hill’s 2007 novel which received a variety of accolades from the CanLit community. It turns out that my unease with the book title was mirrored by the publisher’s, and the UK/US name was changed to Someone Knows my Name. The Book of Negroes is a sprawling epic that follows a female protagonist Aminata Diallo from her idyllic childhood in a West African village to slavery in the American South, and subsequent liberation and escape to Nova Scotia, Sierra Leone, and then London. The narrative spares little detail into the brutality of the transatlantic slave trade. Rape, torture, assault, murder, and all manner of degradations occur on a regular basis. It sometimes made for difficult reading during a morning tea.

Throughout her trials and tribulations Aminata remains a moral and ethical rock. She becomes increasingly weary over her losses (her family, husband, and children to name but a few), but remains wedded to an idea of justice and common decency. Aminata’s intelligence allows her to learn her captors language and make herself valuable to her “superiors”. She also helps slaves and other African descendants to learn to read and write. After she is purchased by a (relatively) enlightened Jewish indigo inspector from South Carolina she is given more freedom and has the opportunity to travel to New York. There she makes contact with free African Americans and learns of the opportunity to escape from her master by joining the British in the American Revolutionary War. Aminata is in charge of maintaining the register of Black Loyalists who assist the British and will be given freedom in exchange for their service. The document is eponymous Book of Negroes. The Black Loyalists are mainly settled in Nova Scotia, and typical of the British imperial promises, they receive little more than nominal freedom. The promised land grants and support and nowhere to be found in Canada’s cold and harsh Atlantic region.

The Book of Negroes could arguably be considered a work of historical fiction. Most of the large events and prominent individuals in the book are true historic figures. For example Aminata is there to witness Canada’s first recorded race riot when a pogram attempts to destroy the fledgling black community in Shelburne and Birchtown. In response Aminata and many other Black Loyalists join the abolitionist John Clarkson in his colonial endeavour to set up a black-majority colony in Sierra Leone. The colony is largely a failure due to inadequate provisions and lack of economic opportunities. The West African economy was at this point beholden to the slave trade and a black settler colony in the middle of a predatory economic system was at risk of capture and enslavement itself. After failing to return to her village of birth and almost being captured in the process, Aminata realizes she has no future in West Africa and takes up an offer by Clarkson to return to England with him. She is recruited by the abolitionists in their cause to present evidence to parliament that the slave trade ought to be outlawed in the British empire due to its barbarity. Wilberforce and Clarkson hope to use Aminata’s testimony to undermine the propaganda of the plantocracy representing the British slave interests in the West Indies. Even though Aminata dies before the Slave Trade Act of 1807 is passed the author does at least offset her story of continued loss with a final gift of family reunification.