The Castle of Crossed Destinies by Italo Calvino (Book Review) 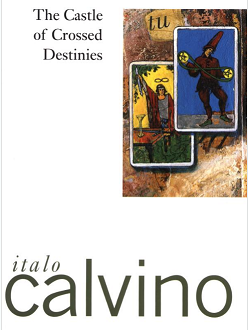 Imagine that you have been invited to a dinner party by a host of only a recent acquaintanceship. Upon arrival, you find yourself seated at a resplendent table with guests equally attired to the quality of their surroundings. However when you attempt to greet your neighbour your find yourself unable to speak. At first you are unsure if perhaps you have had a stroke or some other mental calamity, but the clinking of cutlery and other prandial noises assures you otherwise. While the shock of the situation remains foremost in your mind, the knowing glances from your fellow dinner party guests puts you somewhat at ease.

The host of the banquet, by far the most sartorially adorned, proceeds to hand out Tarot cards to the guests. Once the deck has been dealt, a man on the opposite side of your table places his card in the middle of the table. He returns to his seat but is shortly followed in action by the woman to his right. You puzzle over the strange ritual being played out before you. However, at this pace, it will soon be your turn to place your card on the pile. Your mind picks up the pace: which way are the cards orientated? Is their an ordering to their placement? While not wanting to ruin this peculiar game, you feel that failing to play would be an even worse faux pas and opt to bluff instead. You notice that your card, the comely Three of Spades, does maintain a certain nobility of which you have often wished to express through your demeanor. Might not she be well-oriented against the restless Knight of cups. Inspired by your seeming creativity, you place your card down. Your courage fails you though in the immediate aftermath. Have the guests balked at your move? Certainly this will be the last time you set foot in this mute house. However, the general reaction is nonchalant.

You reflect on the mysterious nature of the game. The rules seem to have be generated by the players and yet the spontaneous order has not diminished the complexity of the structure. What has the host wished to tell his guests by placing charms on our ability to speak and participating in this game? The nature of expression? Our relationship to the laws of physics? That we must play the hand we have been dealt?

The cards of crossed destinies 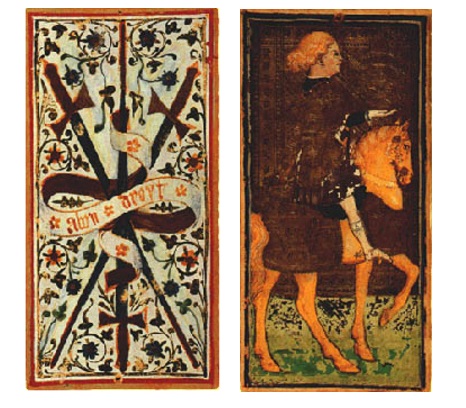 Italo Calvino is probably one of the best known Italian writers in the English speaking world,[1] and is said to write in a “postmodern” or “neorealist” style. While I have nothing to say about styles of literature (due to my ignorance) it is clear that he is an impressive writer. In the Castle of Crossed Destinies our host finds himself in a (castle) banquet hall unable to speak, along with other guests. They take turns telling their stories through the a Visconti-Sforza tarot deck. While tarot is primarily known as occultist nonsense in North America, in contrast the cards have a rich and interesting cultural history in southern and central Europe.

And while the pilgrims of Canterbury Tales tell their stories as they travel, one cannot help but feel the verisimilitude to the The Castle. Our narrator, who I presume to channel the personality of Calvino, carries the show with his culturally informed and confidently amusing interpretations of the cards. Consider this passage from the Tale of Ingrate and His Punishment:

The handsome youth made a gesture, as if to demand our full attention, and then began his silent tale, arranging three cards in a row on the table: The King of Coins, the Ten of Coins, and the Nine of Clubs. The mournful expression with which he set down the first of these cards, and the joyous look with which he showed the next one, seemed to want to tell us that, his father having died-the King of Coins represented a slightly older personage than the others, with a mature and prosperous appearance-he had come into possession of a considerable fortune and had immediately set forth on his travels. This last notion we deduced from his arm’s movement in throwing done the Nine of Clubs, which-with the tangle of boughs extended over a sparse growth of leaves and a little wild flowers-reminded us of the forest through which we had recently passed. Indeed if one examined the card with a sharper eye, the vertical line, which crosses the other, oblique pieces of wood, suggested, in fact, the idea of the road penetrating into the depth of the forest.

Throughout each tale our narrator ties the character’s stories into the classic personalities of European fiction. Dr. Faust and his mistaken bargain, Roland and other Arthurian characters, Mephistopheles and his many incarnations, and characters throughout the Shakespearean canon including Hamlet, Lear, and Macbeth. Calvino’s masterstroke is to have these stories and their associated cards create a network of destinies. Can a single permutation move us from Percival’s quest for the holy grail to Oedipus’ tragic destiny? Calvino seems to suggest that the a small set of symbols can create a vast tapestry of human experience. This poetic idea holds true in the fundamental building blocks of life: four nucleic and bases and twenty amino acids construct almost all life on earth, to information theory: physical states can can always be described by some finite set of boolean values (bits). 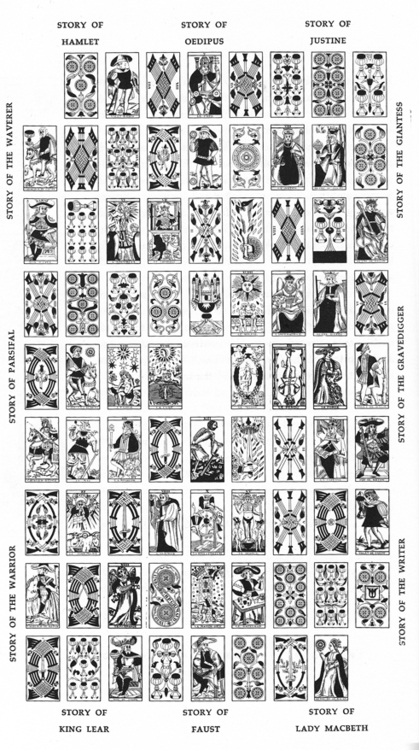 The Harcount Book’s version of the The Castle which I picked up from my favourite book store in Vancouver is typeset in Erhardt and uses the tarot images well placed in the margins from the Visconti pack. In his post script, Calvino describes the multiyear process he spent in putting together these stories.

And so I spent whole days taking apart and putting back together my puzzle; I invented new rules for the game, I drew hundred of patterns, in a square, a rhomboid, a star design; but some essential cards were always left out, and some superfluous ones were always there in the midst. The patterns became so complicated (they took on a third dimension, becoming cubes, polyhedrons) that I myself was lost in them.

His labour was well worth it.