The Birth of the Mind by Gary Marcus (Book Review) 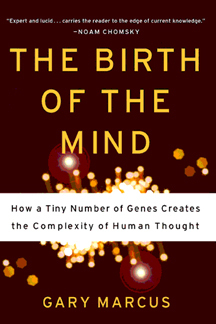 The risk of reading a book written in 2004 about the biology and genetic origins of the brain, which was only a few years after the entire human genome was sequenced, is that the studies and research cited can become deprecated in a field advancing with leaps and bounds. Luckily, Gary Marcus’ The Birth of the Mind avoids falling into this phenomena, and instead provides an excellent overview in understanding how genes are fundamental in determining the structure of our species’ most important organ (or according to Woody Allen, his second) as well as the similarities and differences with those of other animals. If I could summarize this book with one quote from a chapter title page it would be:

“The genetic code is not a blueprint for assembling a body from a set of bits; it is more like a recipe for baking one from a set of ingredients. If we follow a particular recipe, word for word, in a cookery book, what finally emerges from the oven is a cake. We cannot now break the cake into its component crumbs and say: this crumb corresponds to the first word in the recipe; this crumb corresponds to the second word in the recipe, etc.”

Ironically, this quote is actually from Richard Dawkins, but it illustrates one of the key conceptual problems Gary Marcus addresses. Given that there are billions of neurons, and trillions of neural connections , how can only 30,000 human genes account for the magnificent complexity we observe in our brains? Marcus’ convincing answer is twofold. First, genes, like say baking soda in the cake analogy above, do not map to one particular element. Instead what they do instead is provide a set of IF and THEN instructions which can create vastly different organs or biological processes depending on the context. To demonstrate this, we are given examples of scientific studies where cells are removed from one organ and transplanted to another and seen how well they succeed. The answer is that some operate perfectly well, if the set of instructions they have work just as well in the cerebrum as the cerebellum, for example. Of course almost all cells have the same set of instructions because each one has a copy of our DNA! However, these transplant studies only work well in early stages of development because once a cell reaches a certain level of maturity, its biochemical structure no longer permits it to work well in different parts of the body.

The second answer to this question is simply one of combinations and permutations, and is related the first answer. For example, let us say we are a fairly simple organism only starting to develop cognitive facilities and only have a few thousand genes to play with. Suppose a few genes are directly related to making bones, and a few to a basic nervous structure. Now, if a new gene “Regulator X” comes along which says IF there is this concentration of such and such THEN do this and that. Because the concentration of chemicals could be radically different in the basic nervous structure when compared to the bones, this new “Regulator X” gene could now affect both muscle and brain development simultaneously, by causing the cells in these two organs to do radically different things. Hence, the effect a new gene can have is magnified by the existing number of genes, and that when one thinks of the combinations of 30,000 genes there are in us humans, it becomes obvious how a complex organism can be created from a simple set of interacting instructions.[1]

After Marcus has convinced us of this paradigm of how genes work by writing rules, he then proceeds to next question: to what extent will these rules determine the outcomes for biological organisms versus the environment in which this rules are implemented. In other words, what amount of the behavioral diversity seen in biological organisms is nature when compared with nurture.[2] Within psychology, there is a viewpoint called ‘Behaviorism’ which stresses the fact that most things are learned, and that even if there is a foundational blueprint, developmental cells exhibit such plasticity in their reconfiguration that it does not make sense to attribute differences in people to differences in genes.[3] The book’s answer is that trying to decompose X% nature and Y% nurture is a largely futile endeavour. Indeed the previous analogy of the cake comes back to good use: what percent of the cake is attributable to baking soda? Ignoring the epistemological issues with that question, it is almost certainly more useful to try to understand the complex relationship between baking soda and the other ingredients and environment involved in the process of making a cake. This analysis of course means that we need to focus on fundamental science and move on past cocktail party debates governing our research agenda, which I of course agree with.

Each chapter of the book is packed with scientific articles and studies cited almost every other sentence. While I think this may have detracted somewhat from the book because it felt a little too ad verecundiam, one interesting thing I took away from some of these studies was ethically questionable nature of some of the experiments we are performing on animals. Now I am by no means an animal rights activist or a vegetarian, but I shuddered somewhat at the examples of eyes being ‘sutured’ shut to see how the visual cortex developed in animals that could not see. I am very much torn on the issue, as I hate to think of animal life being degraded for disputes between psychologists, but at the same time I am more than willing for mice to be given the Rous Sarcoma Virus if it helps us understand cancer treatments better. Overall, I hope that leading universities have strong ethics boards which balance the interest of human advancement and animal suffering.

Overall, at a short 200 pages, The Birth of the Mind provides a nice overview and conceptual framework in order to help give the lay-reader in this field (such as myself) a better understanding of the genetic foundations of our brain. After reading this Marcus’ work, you will definitely be interested in tackling tangential issues discussed in the book such as cognition, the origins of language, and the similarities between the algorithms that govern our body and the man-made computational ones that permit me to write this review on my laptop.