20,000 Leagues Under The Sea by Jules Verne (Book Review) 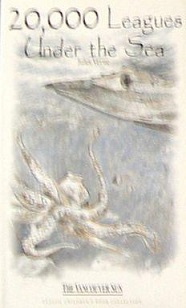 I recently found a very handsome collection of classic children’s books published by the Vancouver Sun. In addition to Alice in Wonderland and Through the Looking Glass, Little Women,[1] and The Hound of the Baskervilles, I picked up Verne’s classic 20,000 Leagues Under the Sea. My memory about Verne and his cultural impact were somewhat obfuscated both because: [i] Captain Nemo was in The League of Extraordinary Gentlemen (an Alan Moore graphic novel), and [ii] where H.G. Well’s books started and Verne’s ended were somewhat fuzzy in my brain.

The book introduces us to a very Victorian world with international steamship lines, a Professor Aronnax with his trusty manservant Conseil,[2] a comically one-dimensional Canadian whaler named Ned Land,[3] a Commander Farragut, and a putative narwhal that is attacking (accidentally?) ships in divers places. The United States navy, concerned about rogue narwhals (the Emancipation Proclamation has already been signed so don’t worry), has commissioned the Abraham Lincoln (the year is 1869 so it is a posthumous title) to track down and kill this pesky beast lest it bother another steamship. Farragut displays Ahab-like qualities in his bizarre determination for the destruction of the natural world:

Ned Land of course fits the limits of imagination for what a Canadian could constitute in the 19th century:[4]

Ned Land was about forty years of age; he was a tall man … strongly built … occasionally violent, and very passionate when contradicted. His person attracted attention, but above all, the boldness of his look, which gave a singular expression to his face. Who calls himself Canadian calls himself French … It was an opportunity for … me to hear, that old language of Rabelais, which is still in use in some Canadian provinces.

M. Aronnax is persuaded to accompany this voyage in order to prove his hypothesis of a gigantic narwhal as being the source of this hubbub. After the ship (somehow) tracks the creature to (somewhere) in the pacific, Ned Land throws his harpoon at the “creature” only to find it attack the ship sending Ned, professore, and Jeeves into the water. The threesome find themselves suddenly afloat the “monster” which turns out to be a submarine in which they are forcibly abducted into. The crew of the ship enforcing the imprisonment leaves a bad impression, forcing Ned to remark that “[h]ere are people who come up to the Scotch for hospitality. They only just miss being cannibals”, however Monsieur lets cool heads prevail by reminding the Canadian to “not excite yourself”. A Victorian exchange of dialogue if ever there was one.[5]

Despite the initial reception, the trio are eventually introduced to Captain Nemo who presents them with an opportunity to accompany him in his remarkable submarine and travel beneath the world’s great oceans. The catch is that they do not actually have a choice, as Nemo says he cannot not let them leave lest they inform the rest of the world about him and presumably lead to him being hunted down. The reader is of course curious how the three will fare on board this amazing machine.

We soon find out that things might not be so bad aboard this ship. First, Captain Nemo has an excellent library with over twelve thousand books: “[w]orks on science, morals, and literature abounded in each language; but I did not see a single work on political economy; that subject appeared to be strictly proscribed.” Horrid, horrid political economy. Of course, the library also doubles as a smoking room, and the Captain rolls his own kelp Cohibas. Lest a massive library prove insufficient, the el Capitano has also procured works of the masters including:

A Madonna of Raphael, a Virgin of Leonardo da Vinci, a nymph of Corregio, a woman of Titian, an Adoration of Veronese, an Assumption of Murillo, a portrait of Holbein, a monk of Velasquez, a martyr of Ribera, a fair of Rubens, two Flemish landscapes of Teniers, three little “genre” pictures of Gerard Dow, Metsu, and Paul Potter, two specimens of Gericault and Prudon, and some sea-pieces of Backhuysen and Vernet. Amongst the works of modern painters were pictures with the signatures of Delacroix, Ingres, Decamps, Troyon, Meissonier, Daubigny, etc; and some admirable statues in marble and bronze, after the finest antique models.

A collection of artwork aboard the Nautilus (would such luxury embarrass the Donald?)


Won over by the learnedness of his captor, P. Aronnax begins to delight in the sea adventures the Captain takes on, especially the exploration of the island of Vanikoro where Jean-François de La Pérouse became stranded after both his vessels La Boussole and the Astrolabe sunk. Diving below the surface, Nemo clears up the entire historical ambiguity of this episode and shows that rather than hungry native cannibals it was definitely the coral reefs that got them. Speaking of natives, they encounter many primitive persons throughout the novel, but the civilized Aronnax has some trusty heuristics guiding his behavior: “Between Europeans and savages, it is proper for the Europeans to parry sharply, not to attack”. When reading the book, it dawns on one that whilst Nemo proclaims he has left the world of man for the sea due to its hypocrisy and corruption, he has not really ‘gone native’ in his new environment. That is, he is fundamentally a gentleman under the sea with his library and hunting trips (sharks rather than foxes). Although slightly halfway through the book we learn that the Captain is not a European as he explains:

That Indian, sir, is an inhabitant of an oppressed country; and I am still, and shall be, to my last breath, one of them!”

As mentioned before, one of the most disturbing themes is the continual wanton destruction of wild life. Upon seeing a massive dugong, the poor Ned Land feels a burning desire to slaughter the animal (he is a harpoonist right?), to which Nemo encourages the blood lust by quipping: “If you held a harpoon just now, Master Ned, would it not burn your hand”, upon which a multi-hour hunt begins with Ned slowly destroying the creature. Ned is really a one-dimensional character:

“I leave anyone to imagine the covetousness of the Canadian at the sight of this savoury game, and whether he did not regret having no gun. But he did his best to replace the lead by stones, and, after several fruitless attempts, he succeeded in wounding a magnificent bird.”

The dugong: a worthy target for extirpation, apparently 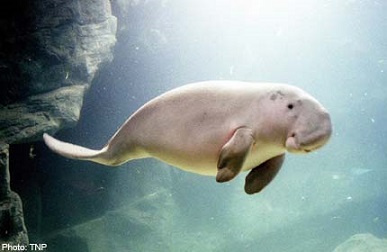 Or consider this gem from the professor:

Those are cachalots–terrible animals which I have met in troops of two or three hundred. As to those, they are cruel, mischievous creatures; they would be right in exterminating them. 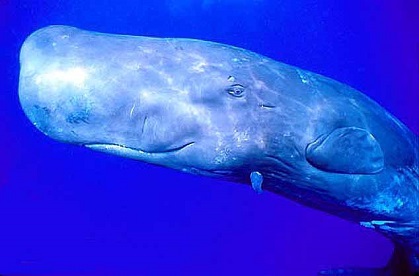 The modern reader feels that this seeming lack of compassion for animals is in strong contrast to our modern scientific view.[6] There are other statements of 19th century science that strike the reader as queer too:

“The violence of subterranean force is ever diminishing. Volcanoes, so plentiful in the first days of the world, are being extinguished by degrees; the internal heat is weakened, the temperature of the lower strata of the globe is lowered by a perceptible quantity every century to the detriment of our globe, for its heat is its life… The sun is not sufficient, Conseil. Can it give heat to a dead body?”

Did well-informed persons in the 1870s really believe that life on earth would die out because volcanoes were spewing forth all the internal heat of the planet?!

After a while I found myself experiencing a touch of ennui as Nemo brings his indentured guests on one fantastical journey after another from Atlantis to a Red Sea tunnel. They also find time to be the first persons to visit the South Pole![7] Although it was apparently a lot warmer back then as they noticed that there are abundant flora and fauna (don’t worry Need didn’t throw rocks at any of them). The triumvirate also begin to feel a little homesick, and by the end of the book they are planning their escape. After all, they will have a lot of scrapbook memories including:

The Torres Straits, the savages of Papua, the passage of Suez, Atlantis, the South Pole, the imprisonment of ice, the fight among the poulps, and the horrible scene of the vessel sunk with all her crew.

At the very moment of their escape,[8] the three stooges find themselves disembarking during the middle of the Norwegian maelstrom (the Moskstraumen). But of course, it is the Nautilus which gets sucked into this whirlpool (or so we are led to believe) whilst the three wise men end up washed ashore in a sleepy Norwegian fishing village. While I am certainly glad I read the book, it is another reminder that while the classics can be important for understanding the evolution of a literary genre, the underlying quality of the work can still be mediocre. I would venture to put 20,000 Leagues in this category.

No one ever expects the Moskstraumen! 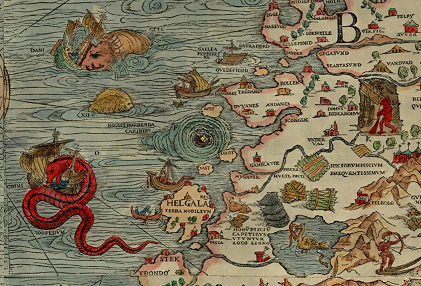